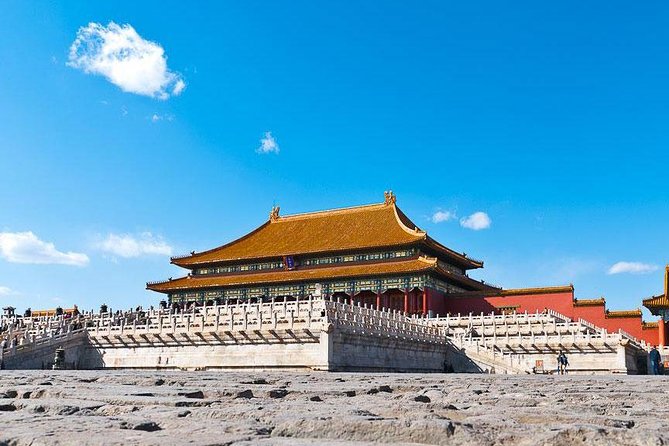 Enjoy a VIP tour of two UNESCO World Heritage Sites from Beijing the Forbidden City and Badaling Great Wall Ruins. With your expert guide, gain special entry to two of the Forbidden city's less public sites the Treasure Gallery and the Clock Exhibition Hall of the Palace Museum where youll discover imperial riches from the Ming and Qing dynasties. You will also see the famous Nine Dragon Screen of The Palace as well as Gate and Palace of Heavenly. Then, walk along the newly opened Ruins of the Great Wall, an authentic and less-traveled section with insight into Chinas magnificent past. A Chinese banquet lunch with Peking duck completes this amazing full-day experience.

After pickup from your Beijing hotel in the morning, your VIP tour begins with a drive to the Forbidden city, a 180-acre (74-hectare) imperial palace that housed 24 emperors since it was built in 1420. Once forbidden to all without permission from the emperor, the UNESCO World Heritage Site the worlds largest palace complex includes 980 buildings and 8,700 rooms.

When you arrive, follow your guide on a tour of the Palace Museum, exploring the worlds largest collection of preserved ancient wooden structures as you view the vast collection of antique artwork and artifacts on exhibit. Your guide will enlighten you about Chinas cultural history from the Ming and Qing dynasties along the way.

Then, follow your guide on a special and intimate tour of two of the Forbidden city's hidden treasures Treasure Gallery and Clock Exhibition Hall. First, venture into the Treasure Gallery (Zhenbaoguan), situated in the northeast area of the Forbidden City. See the unique displays of royal jewelry, imperial robes and crowns, including the famous Jade Cabbage. Admire works made of gold, silver, pearl and jade as well as utensils, tea services and daily necessities of the imperial families that resided here.

Head to the Clock Exhibition Hall, where 200 clocks and watches from the imperial collection, including some Chinese-made timepieces, are on display. Here, admire the chime clock, made during the Qing Dynasty by the royal clockmakers, and the whimsical 20-foot-tall (6-meter) water clock, constructed in 1799 and the largest of its kind in China.

From the Forbidden City, head to Jingshan Hill, the highest point in Beijing city. Built during the Liao and Jin dynasties, the well-preserved imperial gardens offer a birds-eye view of the entire Forbidden City and Beijing. Afterward, dine on a typical Beijing banquet for lunch, including renowned Peking duck.

Then, follow your guide on a tour of the newly opened Ruins of the Great Wall, situated 18 miles (30 km) from the main Badaling Great Wall site. Virtually isolated, the Ruins of this UNESCO World Heritage site will afford you a tranquil exploration of its ancient forts, towers and courtyards. Follow the steps of the Chinese soldiers who once marched along the high fortification with their horses. Your guide will enlighten you about this authentic portion of the Great Wall while you enjoy panoramic views of the mountains and surrounding landscape.

You'll return to your Beijing hotel in the evening.

Entry/Admission - The Great Wall at Badaling

Tour requires a minimum of 2 passengers to operate. There is a possibility of cancellation after confirmation if there are not enough passengers to meet requirements. In the event of this occurring, you will be offered an alternative or full refund