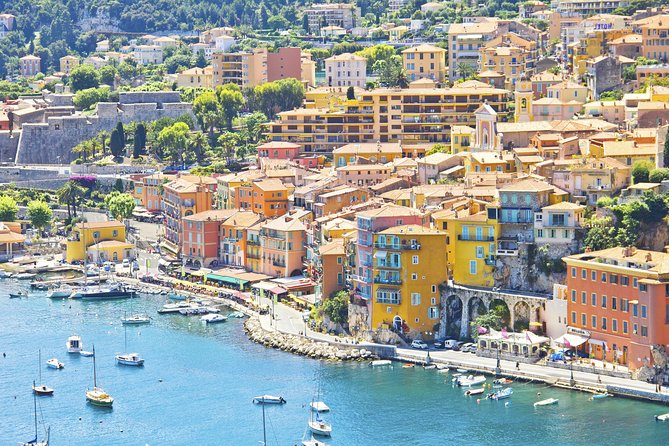 Take advantage of your time in port in Villefranche, near Nice, by discovering two gems of the French Riviera: Eze and Monaco. On this small-group shore excursion, visit the picturesque village of Eze for a guided tour of the Fragonard perfumery. Then enter glitzy Monaco to watch the Changing of the Guard ceremony at the Prince's Palace, drive along the world-famous Formula One Grand Prix race circuit and visit Monte Carlos Casino Square.
This small-group morning or afternoon tour is limited to eight people, ensuring you'll receive personalized attention from your guide.

When your cruise ship docks at the Villefranche-sur-Mer port, about 15 minutes up the coast from Nice, your guide will be waiting for you at the cruise terminal to take you on your half-day shore excursion to Eze and Monaco.

Board the 8-passenger minivan, and enjoy views of the French Riviera and the Mediterranean as you drive along the spectacular coastal road to your first stop, the lovely medieval village of Eze.

Eze offers breathtaking views of the Cte d'Azur from its hill-top location of 1,400 feet (427 meters). Start with a guided walking tour of the town, filled with charming artisan shops, and then head to the Fragonard perfumery to discover the exquisite art of French perfume making. Learn about the history of the esteemed Fragonard brand, trace the steps involved in perfume production and savor the fragrant aromas of the finished products.

Continue driving along the Middle Corniche through the village of La Turbie, known as the 'Terrace of Monaco,' where youll see an impressive Roman monument called the Trophy of the Alps (Trophe des Alpes). Then cross the border into the glamorous principality of Monaco the second-smallest country in the world!

On the morning tour, youll attend the Changing of the Guard ceremony (performing 11:55am only) at the Prince's Palace (Palais Princier). Then head to Monaco Cathedral, the resting place of Prince Rainier and Princess Grace. Learn about the cathedrals history and admire the fine Roman-Byzantine architecture.

Soak up Monacos luxurious atmosphere as you drive along the road used in the Formula One Grand Prix race event, which attracts thousands of motorsports fans from all over the world each year. Then take a stroll around Casino Square in Monte Carlo, the stomping grounds of the rich and famous filled with impressive hotels, luxury cars and beautiful gardens.

After your tour of Monaco, relax on the coastal drive back to Villefranche to conclude your half-day shore excursion.

Worry-free Shore Excursion:We will ensure your timely return to the Villefranche-sur-Mer port for this activity. In the rare event your ship has departed, we will arrange for transportation to the next port-of-call. If your ship is delayed and you are unable to attend this activity, your money will be refunded. See our terms and conditions for full details.

Guided tour of perfumery in Eze