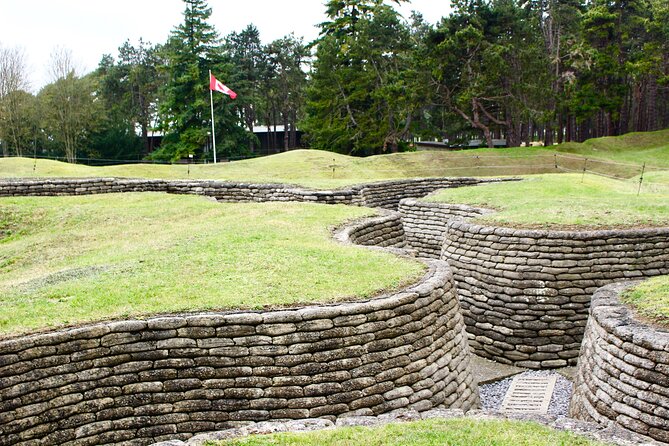 A Private Tour is the best way to experience the battlefields with a knowledgeable and certified guide. We have 16 years of experience in organizing battlefield tours in France.
Discover the Arras and Vimy Battlefields for a Day Trip in northern France, easy accessible coming from Paris or Lille by train for the day.
Starting from ARRAS (other location possible on demand) this tour will allow you to discover the sites of the WW1 battles in northern France: the trenches at Vimy ridge, the monuments, memorials and bunkers... each tour is unique, if you want to follow in the footsteps of a relative or visit any specific site of interest to you we can build up a personalized tour and itinerary for you.

Itinerary
This is a typical itinerary for this product
Stop At: Vimy, Vimy, Pas-de-Calais, Hauts-de-France
We will start the tour visiting Vimy ridge, the largest Canadian Memorial on the Western Front which commemorates nearly 11.000 Canadian soldiers who died in France and have no known grave.
The capture of Vimy ridge was a great victory for the Canadian Corps and today it's one of the best preserved World War One battlefields with its preserved trenches, shell holes, mine craters and tunnels.
The new visitors centre will be visited as well as the tunnels (open to the public during the season).
Duration: 2 hours
Stop At: Neuville-Saint-Vaast, Neuville-Saint-Vaast, Pas-de-Calais, Hauts-de-France
The largest war cemetery in France is located at Neuville Saint Vaast, it is the resting place for 44.000 German soldiers who lost their lives in the region during the various battles of Artois.
Duration: 20 minutes
Stop At: Grand Place, Arras France
Free time for lunch on this very nice place.
Duration: 1 hour
Stop At: The CWGC Experience, 5 rue Angele Richard, 62217 Beaurains France
Visit to this unique new visitor attraction that shines a light on the work of the remarkable organisation at the heart of remembrance of the war dead.
The CWGC Experience was awarded the Best Tourism Project in Europe at the 2019 British Guild of Travel Writers International Tourism Awards.

Duration: 1 hour
Pass By: Mont-Saint-Eloi, Mont-Saint-Eloi, Pas-de-Calais, Hauts-de-France
We will pass the abbey of Mont Saint-Eloi, used as an observation post in the battles of Artois.
Stop At: L'Anneau de la mmoire, D58E3, Chemin du mont de Lorette, 62153 Ablain-Saint-Nazaire, France
The new memorial, called "The Ring of Remembrance" commemorates the 600.000 soldiers from all nations who lost their lives in Northern France during the First World War.
Duration: 30 minutes
Stop At: Necropole Nationale Francaise de Notre-Dame de Lorette, 2 Place de Notre Dame de Lorette, 62153 Ablain-Saint-Nazaire France
After the First World War, the hill of Notre-Dame-de-Lorette was chosen by the French Government to receive the remains of French soldiers from over 150 cemeteries on the fronts of Artois, Flanders, Yser and the Belgian coast.
This site contains 20,000 graves and the remains of 22,000 unknown soldiers.
Notre-Dame-de-Lorette is Frances biggest national necropolis.
Duration: 30 minutes