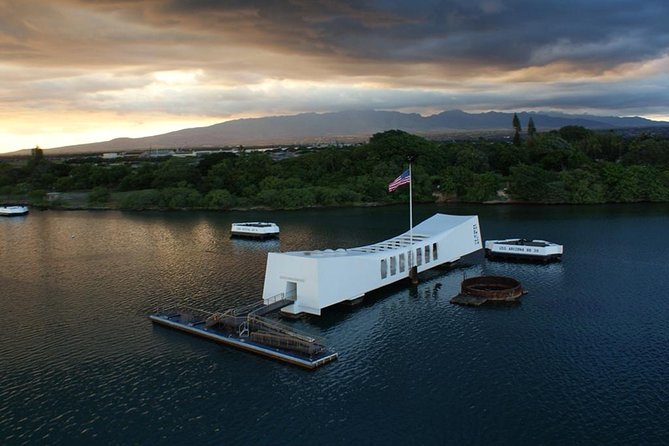 A very fast, easy and hassle-free Pearl Harbor visit. No waiting in line, Pick up from Honolulu Port directly to Pearl Harbor. We will provide complimentary cold drink, transfer with the clean, nice and fully insured vehicle by professional chauffeur. USS Arizona Memorial and USS Bowfin Submarine tickets are included in this package for clients.

You will be picked up by our chauffeured style vehicle and taken to Pearl Harbor where you are offered a cold drink of water or tropical juice before accompanied to the entrance of the Visitors Center. You will be met by our supervisor dressed in black with a gold tie to give you a brief orientation and provide your vouchers & tickets.

Feel the comfort as we take you to the most visited Pearl harbor historic sites. This executive level small group Pearl Harbor tour includes the Uss arizona memorial , USS Bowfin Submarine tour and a complimentary drive through tour to some great places and structures in historic Downtown Honolulu.

Visit Pearl Harbor with us and enjoy this executive level small group tour. We are a trusted provider of luxury tours in Hawaii, offering VIP services at the most reasonable rates. Pamper yourself and have a comfortable and worry-free tour in an executive van when you book this package today!

Our chauffeur will pick you up from Honolulu Port and take you to Pearl Harbor. Well manage everything for you before your arrival to Pearl Harbor, so you can avoid long lines and enjoy a hassle-free tour.

After your Pearl Harbor tour, our chauffeur will take you on a drive-through tour of Downtown Honolulu City to show you the statue of King Kamehameha and the renowned Iolani palace, State Capitol, Washington place and then return you to your original pick up location.

Museums of " Road to War

Boat ride to Monument and back

Guaranteed to skip the long line

No bags are allowed in the Visitors Center at Pearl Harbor. This is any bag that is able to conceal a fist-sized object. We are not able to hold your personal items for you. If you do bring a bag, you will need to check it in at the bag check located near the entrance to the Visitors Center. The price to check your bags in is $5.00 per piece and there is a line. The length of the line varies, but this will cut into your time at Pearl Harbor as we cannot keep those who did not bring bags in waiting for those who do. Clear bags, medical supplies (as long as it fills the container that it is in), very small bags (that you cannot fit your hand into), small cameras, and cellular phones are allowed. Please note that the National Park Service does reserve the right to ask you to check items in and the decisions of the Park Rangers are final.

Please make yourselves reachable. When booking, please provide accurate information for contact and for your accommodation. While we will do our best to contact you and provide your pickup information, we will not be responsible if you fail to provide the proper hotel or phone information for pickup.