Waitomo Day Trip With Option To Add Hobbiton From Rotorua 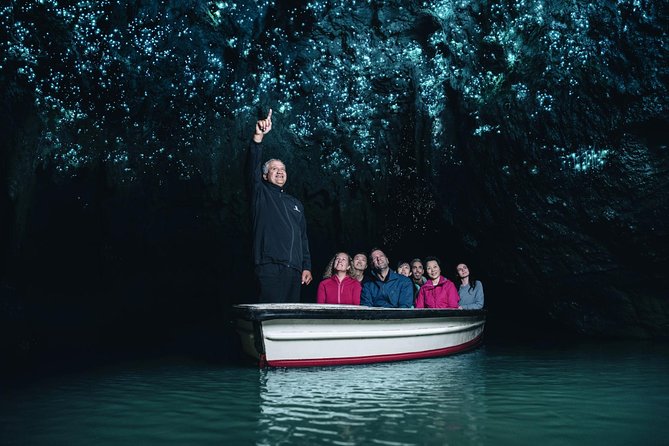 You can design your own ideal day with a full-day tour to Waitomo. Choose between Waitomo Glowworm Cave, Ruakuri Cave and or Hobbiton!
At the famous Waitomo caves Waitomo Glowworm Cave, you will skip the queues and ride a boat beneath thousands of twinkling glowworms in the famous Waitomo Cave.
Choose to either have free time in Waitomo and stroll through native forests and the spectacular limestone landscape or visit the nearby Ruakuri cave. The vast Ruakuri Cave features waterfalls and limestone formations.
Feeling adventurous? Join us for a sensational underground Black Water Rafting Adventure, floating down an underground stream on a rubber tube admiring the glowworms above.
Choose to add on Hobbiton movie set (2 hour guided tour) and drink at the Green Toad on completion. Finish your day in Auckland or Rotorua.
Please note; if you decide to end your day in Auckland and do not want to join the Hobbiton movie set Tour you will have a 2-hour wait at Hobbiton

Follow an expert guide as they lead you through this expansive and amazing village! We'll see all the great and memorable sties from the Shire, including the Green Dragon Inn and field where Bilbo's birthday party was held! Along the way they'll provide exclusive commentary about the films and set, as well as the interesting characters who've visited the set over the years. They will even help take photos of you besides the miniature homes and gardens.

Here we'll enjoy a tour of an amazing natural wonder and meet the thousands of little glowworms that turn these dark caverns into gorgeous turquoise tunnels! These unique creatures are only found in New Zealand and welcome you to explore their subterranean home. Ride a boat beneath thousands of twinkling glowworms in the famous Waitomo caves. We'll also have free time here to explore on our own.

Enjoy the tour with your Local Legend Guide! They will tell you unique history and interesting facts while you journey with them for the day!

we'll head to Ruakuri Cave for a 2 hour tour of this fascinating pitch black cavern! Ruakrui, or "Dog's Den" in the local Maori, was originally a Maori burial site. This extensive cave hosts of complexly shaped limestone formations. Here we'll take the longest underground guided tour ever, descending into New Zealand's depths to discover million year old stalactites - some of which even have fossils embedded in them and have grown coral! Don't worry about bringing a flashlight, cause the caverns will be aglow with walls of glowworms!

Transport by air-conditioned coach or van

Child ages 414 half price of adult

If doing a Black Abyss or Black Labyrinth Tour, a wet suit will be provided for you. However, please bring swimwear to wear underneath your wetsuit as well as a towel and a warm change of clothes.

Please note: if you decide to end your day in Auckland and do not want to join the Hobbiton Movie Set Tour you will have two hours at Hobbiton to relax in their cafe.

This tour/activity will have a maximum of 22 travelers