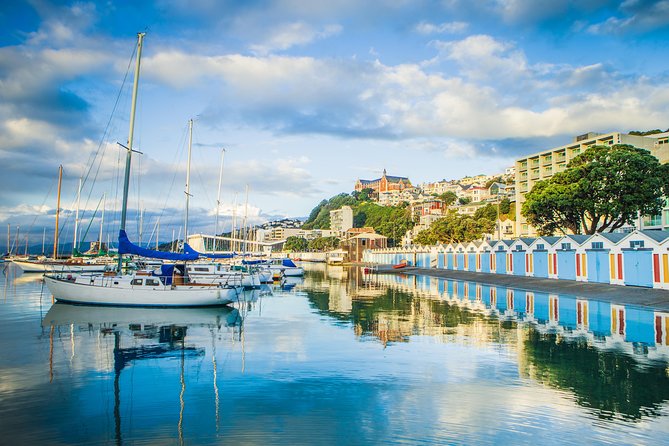 Discover the highlights of Wellington on this guided 2.5-hour coach tour around New Zealands beautiful capital city. Admire local landmarks and historic buildings, including icons such as the Beehive and Old St Pauls Cathedral. From Mt Victoria, enjoy panoramic views over Wellington Harbour and the South Coast, and drive through pretty suburbs including Seatoun and Oriental bay. Visit parts of the Wellington Botanic Garden and take an optional ride on Wellingtons iconic red cable car. You'll see and learn more with your expert guide for an excellent overview of Wellington.

Admire the architecture of New Zealands Parliament buildings, including the unusual design of the Beehive (aka Executive Wing) and the neoclassical Parliament House. Then have time to stop and walk around Old St Pauls Church, which was constructed entirely out of native timber and is considered one of the finest heritage-listed buildings in New Zealand.

Disembark at the Wellington Botanic Garden, which features both native and non-native species on a gorgeous 62-acre (25 hectare) property. Your guide shows you the Begonia House and Lady Norwood Rose Garden where formal gardens showcase more than 3,000 roses.

Have the option to hop on Wellingtons famous red cable car (at own expense) for the 5-minute ride from the botanic gardens down to the city center, enjoying great views and an iconic Wellington experience.

Soak in the scenery as your coach climbs to the summit of Mt Victoria. From the lookout, enjoy panoramic city views and a birds-eye perspective of the rolling hills and rugged bays that surround Wellington. As you head back to the coast and pass through picturesque suburbs such as Oriental Parade, Seatoun and Thorndon, hear stories about historic shipwrecks off the South Coast and take in the vibrant atmosphere of the Wellington waterfront.

Throughout your tour, your guide provides informative commentary on the history and sights of Wellington. You can also get great tips on dining and local hot spots. Youll see so much in a short time on this tour of New Zealands dynamic capital, making it a great introduction to this beautiful city.