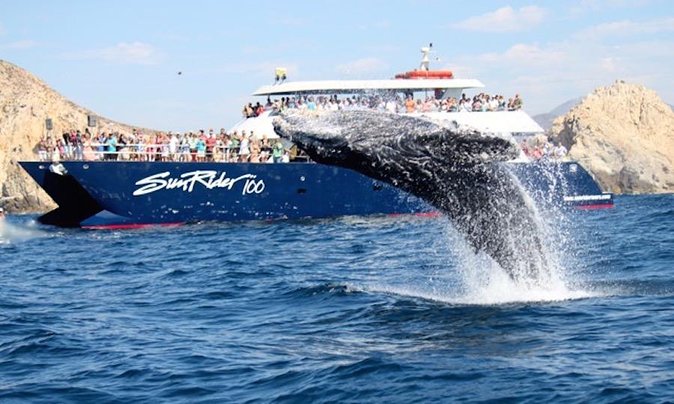 Experience whale watching like never before. Humpbacks and grays visit Los Cabos' warm waters every year, providing one of nature's most incredible shows. You also get a delicious brunch as the captain looks for whales as soon you depart from the marina. This tour has a 90% record of finding whales in the 23 years it has been operating. Comfort and safety are guaranteed on board of the new Sun Rider 100' catamaran.

Your tour begins as your captain welcomes you on board and the crew will offer our welcome drink, beer or the drink of your preference. Then, you'll head out to Cabo's number one landmark "The Arch", providing time for the obligated picture with friends and loved ones.

From there, you'll head to "look for whales" as the crew know their whales, their characteristics, behavior and how to follow them without disturbing them, and as the rules dictate. See these amazing creatures and take incredible pictures with the breathtaking background Cabos has to offer.

After you have taken all the pictures you wanted, the captain will take you to a calm place to have dinner with a good variety of food to enjoy. It is all fresh, prepared on board for you! The crew will also have a show for you and the dance floor will be open so you can dance your way back to the marina.

Note: Refunds will not be issued if tour/activity is missed due to late or non-arrival of cruise ship