Remembrance Tour: The Great War In Flanders Fields From Brussels - With Reviews & Ratings

Remembrance Tour: The Great War In Flanders Fields From Brussels 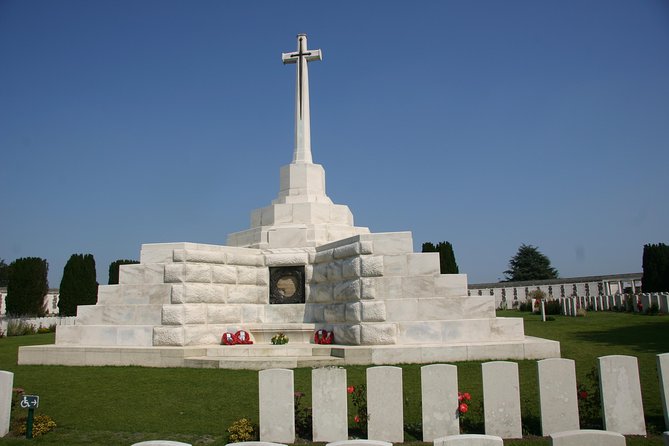 Your visit first takes you to a very moving German Cemetery, from where we drive to a section of the WW1 trenches. You visit the Monument of the Brooding Soldier, which commemorates the sacrifice of 2,000 Canadian soldiers during the first German gas attack. After a set lunch in Ypres your guide takes you to the outstanding Flanders Fields museum. You will hear the touching stories behind four years of trench war. Next, our coach takes you to Passchendaele and the Tyne Cot Cemetery which is the largest Commonwealth cemetery in the world. You will also visit Essex Farm Cemetery. This was the dressing station where Dr. John McCrae wrote the famous poem In Flanders Fields
Time for an evening snack.
At 8 pm you can attend the Last Post Ceremony at the Menin Gate, a daily tribute to all Commenwealth soldiers and officers that were missing after battle.
The tour offers ample opportunity for reflection and to take pictures

The In Flanders' Fields Museum is a museum in Ypres, Belgium, dedicated to the study of the First World War. It occupies the second floor of the Cloth Hall on the market square in the city centre. The building was largely destroyed by artillery during the war, but was afterwards reconstructed.

Zonnebeke is a municipality located in the Belgian province of West Flanders. The municipality comprises the villages of Beselare, Gheluvelt, Passendale, Zandvoorde and Zonnebeke proper.

Hill 60 is a World War I battlefield memorial site and park in the Zwarteleen area of Zillebeke south of Ypres, Belgium.

This was the dressing station where Dr. John McCrae wrote the famous poem "in Flanders Fields".

Near the town of Ieper in Belgium is Passchendaele and Tyne Cot Cemetery, the largest Commonwealth War Graves Commission cemetery in the world. It is now the resting place of more than 11,900 servicemen of the British Empire from the First World War.

A daily tribute to all commonwealth soldiers and officers that were missing after battle.

Lunch at the Old Cheese Factory