Xi'an In One Day: Day Trip From Shanghai By Air - With Reviews & Ratings

Xi'an In One Day: Day Trip From Shanghai By Air 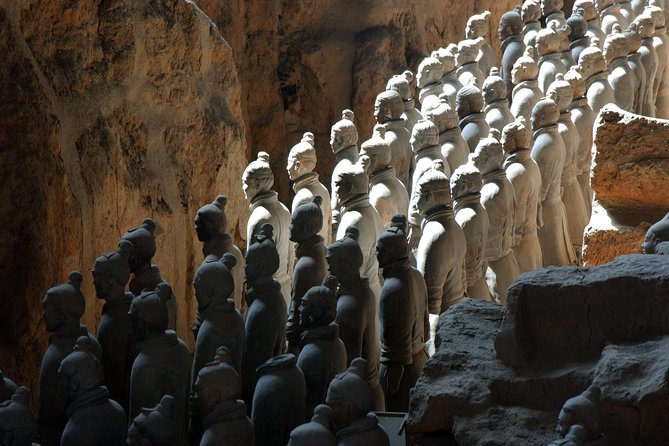 While youre in Shanghai, take a day trip to Xian, famous as one of the birthplaces of ancient Chinese civilization. Youll learn about the history of the Chinese dynasties that rose and fell in Shaanxi Province, and visit the famous 2,000-year old Army of Terracotta Warriors, one of the most spectacular archaeological excavations of the 20th century. Then take a walk on the city walls of Xian, built during the Ming Dynasty (1368 - 1644).

Discover the rich history and archaeology of ancient China on your day trip to Xian from Shanghai. Xian served as the center of Chinese civilization, with 13 dynasties basing their capitals here.

After arriving in Xian, youll visit the impressive Army of Terracotta Warriors. Emperor Qin Shi Huang built this mausoleum starting at the age of 13 (in 246 BC) to prepare for his afterlife. See the 6,000 terracotta figures of warriors and horses, lined in three rows of 210 soldiers. This impressive archaeological discovery is a sight not to be missed!

Feast on a traditional Chinese lunch and then head to the Xian city walls. The Xian city walls were first built in the early Ming Dynasty and are one of the most complete city walls to survive in China. The walls also serve as one of the largest ancient military defenses in China, measuring 36 feet (12 meters) high.

Entry/Admission - The Museum of Qin Terra-cotta Warriors and Horses