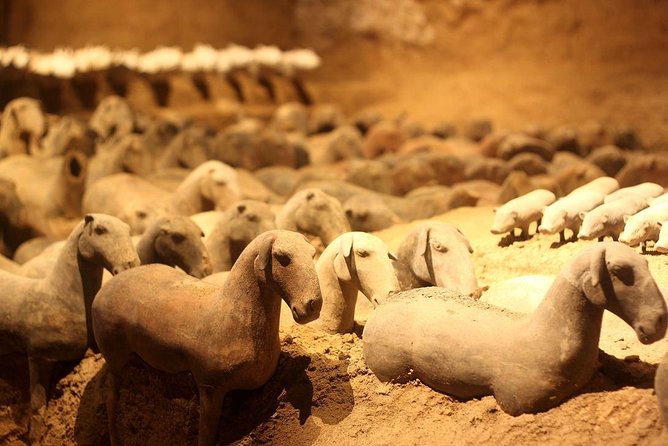 Immerse yourself in a day of Chinese culture with private guide and chauffeur on this 8-hour Xian highlights tour. Besides the Terracotta Warriors and Horses Museum, a UNESCO World Heritage Site that many consider the eighth wonder of the world, visit traditional cave homes, Enjoy a delicous lunch in a nice local restraunrant , after lunch visiting China's only underground museum the Tomb of Emperor Jingdi.

In the morming, our professional tour guide will hold a welcome sign displaying your name to meet you at your hotel lobby at 9:00am, firstly well take you to visit the Eighth Wonder of the World, Terracotta Army Museum, well spend around 2.5 hours visiting 3 different pits of Terracotta warriors and one display room for the Bronze Chariots, which are regarded as the largest bronze ware in the world. Afterwards well take you to explore the traditional cave house, where many local farmers still live in it today, we can experience and feel the local farmers lifestyle of old and modern China.

Lunch at our hand-picked nice local restaurant at your own cost,
After lunch, well go to visit the Tomb of Emperor Jingdi (the Hanyangling Museum). About 19 miles (30 kilometers) north of Xian, this is the tomb of Emperor Jingdi (188-141 BC) and his wife Empress Wang Zhi. Around 50,000 terracotta figurines were found and housed in a museum on site, where you can walk over all the the burial pits, which are covered in glass.
we'll drop you off at your hotel or your suggested place in the city enter at the tour end around 5:00pm.

Lunch in a nice local restaurant

Entrance fee to the sights listed in the itinerary

Entry/Admission - The Museum of Qin Terra-cotta Warriors and Horses

Gratuity to the guide&driver if we did a good job

Our English-speaking guide will reconfirm with you prior to the depature date;

A maximum of 11 people per booking