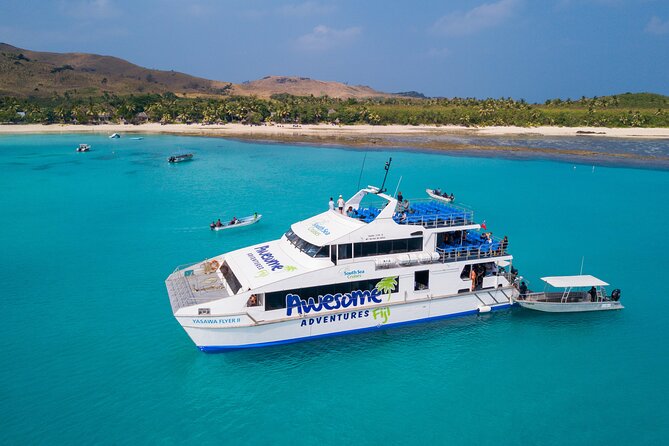 Escape to the remote and rugged Yasawa Islands on a full-day cruise from Port Denarau Marina near Nadi. On board a comfortable, high-speed catamaran, take in the stunning and varied scenery as you cruise through the ancient volcanic islands of the Yasawa island group.

The Yasawa Island catamaran departs from Port Denarau Marina, located just 20 minutes from Nadi International Airport. On board the Yasawa Flyer, you will discover the Yasawa'sstunning and varied sceneryandit's ancient volcanic islands. Cruise along the coast of the many islands - at the southern end they have steep volcanic cliffs and unusual rock formations whilst towards the end of our run in the famous "Blue Lagoon" the surrounding islands are more low lying with palm fringed, long sandy beaches.

Cruise close by endless beautiful beaches, villages and the numerous locally owned resorts catering to backpackers and travelers looking for that something a bit different.Settle into island time andenjoy a packed lunch on board.

Packed Lunch included to eat on board

Meals not included for infants

You must contact South Sea Cruises at least 24 hours before your activity date to confirm your reservation and arrange Transport. Use the contact details on this voucher. Upon check in please present your confirmation or voucher in exchange for your tour boarding pass

All passengers over the age of 17 are required to be fully vaccinated against COVID-19 with a WHO-recognized vaccine. Customers will need to complete and submit a pre-cruise health declaration form & provide a form of Government-issued evidence of their COVID-19 vaccination status at check-in.