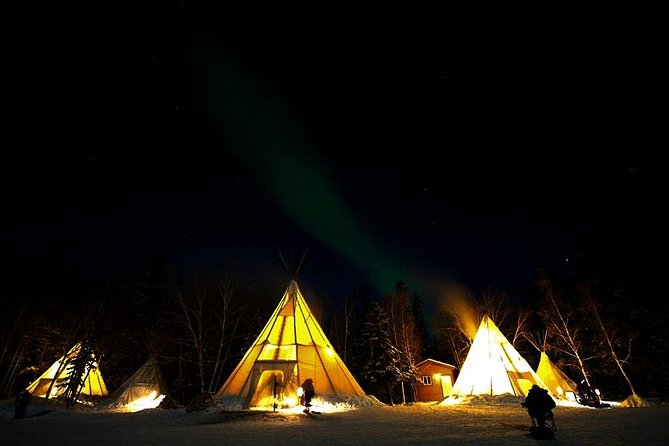 Hunt for the mystical Aurora Borealis, or more commonly known as the Northern Lights, and then dine at the classy Aurora Village lodge restaurant. The first 2 nights of your tour will take you into the wilderness to search for the best aurora viewing. Transportation is included to and from your hotel. On your third night, the tour takes you to one of the world's best aurora viewing facilities featuring heated tee-pees. Wine and dine at the Aurora Village camp whilst waiting for the Northern Lights to paint the sky for you. At the end of the tour your driver and guide will guide you back to your hotel.

Enjoy a romantic night including dinner

Treat a loved one on a special occasion

Day 1: Arrival Yellowknife - Aurora Viewing Tour
Upon arrival your guide will assist you with hotel transfer. Day free of optional sightseeing. In summer/winter you have option to add a Yellowknife sightseeing tour. The tour takes you to historical buildings in Yellowknife; Legislative Assembly, museum, old town, (ice road/ice castle exploration in winter) and your professional guide will tell you the rich history behind Yellowknife.
Evening: Hotel pick up followed by a guided search in the wilderness to the Aurora Borealis. After the tour, your driver will transfer you back to your hotel.

Day 2: Aurora Hunting
Day time to explore Yellowknife at your own leisure or you have the option to try one of the seasonal tours.
(i) Summer Tours: Fishing tours, Wildlife Buffalo Tours or Glass-Works Workshop.
(ii) Winter Tours: In winter time you have an option to add Dog Sledding Tours and or Ice Fishing Tours.
Evening: Hotel Pick up and your guide/driver takes you for another night of spectacular Aurora hunting tour to a different location.
Your night ends with transportation back to hotel.

Day 3: Aurora Village
Day free for you to tour on your own or you can join one of our seasonal tours.
(i) Summer Tours: Cameron Falls Hiking, Aboriginal Cultural Tours or Glass-Works Workshops
(ii) Winter Tours: Dog Sledding Tours, Ice Fishing Tours, Snowmobile Tours and or Glass-Works Workshops
Evening: Early hotel pickup for 3-course dinner at Aurora Village. After dinner heated tee-pees will be available for you to relax whilst waiting for Aurora Borealis to come and dance your night away.
Night ends with transportation back to hotel.

Day 4; Hotel Check-Out and Airport Departures
Hotel check-out and transfer to the airport.

Optional tours available at additional cost - can be booked locally

For winter tours we recommend proper winter wear. Winter gear is available for rental at an additional cost

Hotel accommodation is based one room double occupancy