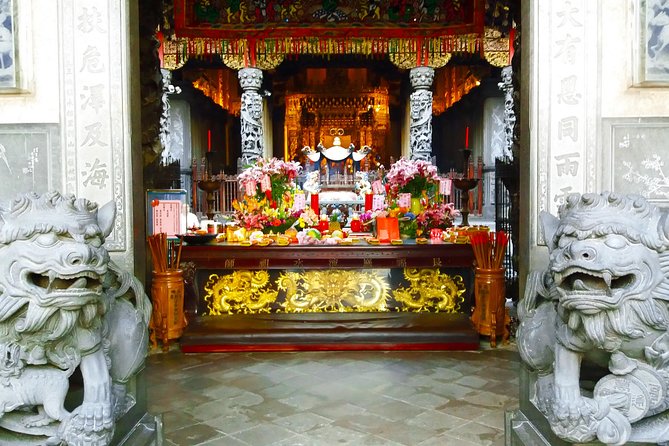 Explore the two neighboring towns of Yingge and Sansia on this tour from Taipei.
Sansia's Zushi Temple is one of the world's finest examples of current Chinese temple art built in 1769. Yingge is Taiwan's ceramic and potter capital, producing magnificent hand-painted works of art, from earthenware tea sets to delicate statues. You will have a chance to experience the pottery throwing there.

This tour visits the neighboring towns of Yingge and Sansia. Yingge is Taiwan's pottery capital, a small town that produces hand-painted replicas of elegant Ming and Ching vases like those that once graced the places in Peking. The old Yingee pottery street is famous for it's ceramic and pottery stores. You'll have the opportunity to purchase some of these exquisite items. Every October the town holds a pottery street festival.

Visit a local Pottery factory where you can watch potters' working the clay and artists painting vases.

Tour continues to the traditional country town of Sansia, originally called Sanjiauyung. The main attraction in Sansia is the artistic Ching Shui Tsu Shih Temple, built in 1769 and destroyed in the 1833 earthquake, it was later rebuilt in 1867. The Ching Shui Tsu Shih Temple is famous for its camphor wood carvings. It is graded a a historic site and is one of Taipei's major temples.

Admission fee and entrance ticket included in the itinerary