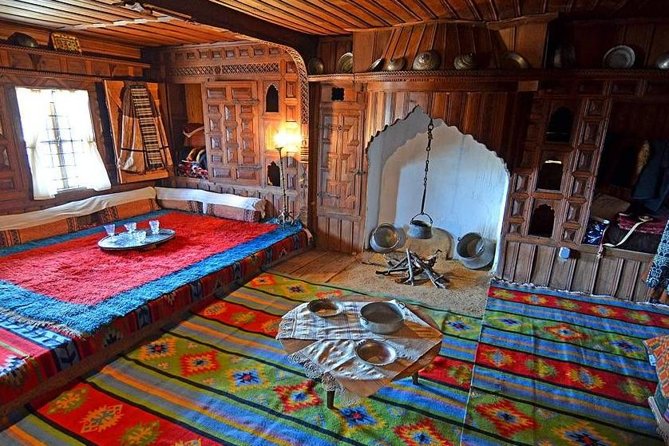 People used to live in this scenic place since way back in time. The area is rich with cool, crystal clear water springs, which is a fundamental settling factor. The local history museum treasures coins dating back to II and III century AD, when the first local inhabitants, the Thracians, were living here under Roman government. One can also see a lot of preserved Thracian burial pottery and jewelery discovered through random excavation works. The ruins of a fortress found on a nearby hill called "Vida" also date back to the Roman era.

These are the main sights that you will discover in your walking tour:

House of Yordan Yovkov- Zheravna
In the home of Yordan Yovkov in Zheravna is an exposition dedicated to the great Bulgarian writer. I The exhibition is focusing on the creativity of the writer and his relationship with the nature of the Kotel. Yovkov's career began as a poet, but his short story brought him fame of a great master.

Art Gallery Zheravna: The collection of the gallery includes over 400 works by artists such as Michalis Garudis, Radi Nedelchev Tzanev Stoyan, Hristo Todorov, Marin Podmolov, Cyril Kazanlakliev, Michael Kurdov, Lika Yanko, N. Deleva and others. Annually in the art gallery "Zheravna" present thematic exhibitions of masters of the brush from Burgas, Sofia, Sliven and others.

House Sava Filaretov Zheravna: Filaretov Sava was born in 1825 and was highly educated for his time. As a prominent politician and activist of the struggle for religious freedom and independence, actively collaborated with various Bulgarian and Russian magazines and newspapers, Sava Filaretov is forced by the Ottoman authorities to leave Sofia. So in 1861 he went to Russia. He died in Cairo in 1863 of tuberculosis.

House Rusi Chorbadzhi: The building was built in the mid-eighteenth century and a two-story building, one of the few well-preserved from this period in Bulgaria. In the house of Russia Chorbadzhi reserved foreign and domestic architecture, and the division of the premises.

Nikula Chorbadzhi Guesthouse- Zheravna: The House is majestic, one of the greatest and solidest structures in Zheravna. For more than 150 years, it is a remarkable model of the Bulgarian Late Revival Architecture. In 1978 the House has been announced a cultural monument of regional significance.

Complex Zlatna Oresha: The authentic architecture from the Bulgarian Revival period is fully preserved. The houses are wooden and two-storey, carrying the atmosphere of times long gone.  The interior is in the typical for this region folk style from XVIII – XIX century, which brings comfort and warmth.

"St. Nicholas“ church - Zheravna village: It was built in the year 1834 and today it has a rich collection of icons, stone sculptures and church plate. Its location is near the old temple burned down in the early thirties of the XIX century. During the Ottoman rule, besides its primary purpose, the church also functioned as a repository of religious literature in the area.