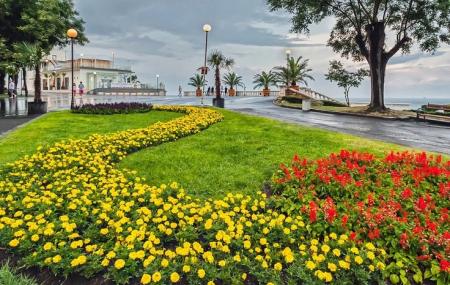 It’s not hard to see why they call this park the heart of the city. Set by the sea, it is a five kilometre long celebration of nature. It was established in 1910 Georgi Duhtev, who saw a great desolate patch of land between the city and the sea and thought to turn it into a botanical garden. He brought hundreds of pieces of exotic plants to the city; today, this older side of the park has been declared a monument.

Scattered about the park are sculptures and busts of notable people in the city’s history, the most famous of which is that of Alexander Pushkin. There are several fountains, an open air theatre called the Snail, the Plazza Dance Centre, the Sea Casino and a small zoo. A number of pubs run along the promenade. In front of the park, stretching out into the water, you’ll find a thin pier. You may walk to its end.

There’s also a tiny amusement park called the Prikazkite. It has about thirty attractions/rides for kids aged 10 and below. It also has a cocktail bar for adults

Several important events are organised at the park every year. The Flora Burgas is an annual international flower show that’s held at the Garden. Others events include the “Burgas and the Sea” Popular Song Contest, the International Folklore Festival, “Spirit of Burgas” Music Festival, and “Turn on the City” Contemporary Art Festival.

Love this? Explore the entire list of places to visit in Burgas before you plan your trip.

Fancy a good night's sleep after a tiring day? Check out where to stay in Burgas and book an accommodation of your choice.

90.92% of people prefer to travel by car while visiting Sea Garden