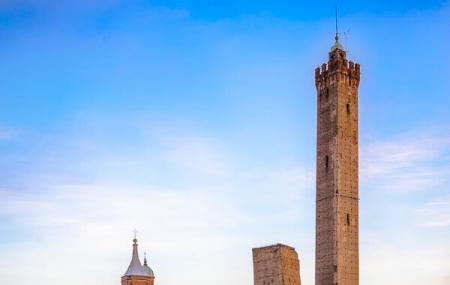 Find hotel near The Two Towers

If Bologna was to be called the Manhattan of medieval era, Torri degli Asinelli e Garisenda would definitely be the twin towers. Critically located at the entrance of the city, the towers displayed the family’s prestige and served military functions back then.

Built in the 11th century Tower of Asinelli is over 97 metres and the tallest in Bologna. Climb a hefty 498 steps only to find you at the top of the majestic red city a chance worth taking! The top gives an extremely picturesque view of Bologna’s streets, hills and monuments. If you are lucky enough to witness a clear sky you can see the foothills of Alps in the Veneto. Once showcasing Asinelli’s pride the tower now is used for a number of scientific observations.

Tower of Garisenda built in 11th century as well, is a 47 metres. Originally built 60 metres tall but later cut off because of safety reasons- still basks to be the third tallest in Bologna. Dante, who saw the tower before the process had started, compared it to a leaning Anteo in the 31st Canto of his Inferno!

With over 100 of skylines of Bologna only about 20 stands tall and among them are the Towers of the Asinelli and Garisenda, a great climb that rewards you with the 360 degree view from the top do not forget to bring your cameras along.

How to Reach The Two Towers

90.12% of people prefer walking in order to reach The Two Towers

People normally club together Piazza Santo Stefano and Compianto Sul Cristo Morto while planning their visit to The Two Towers.